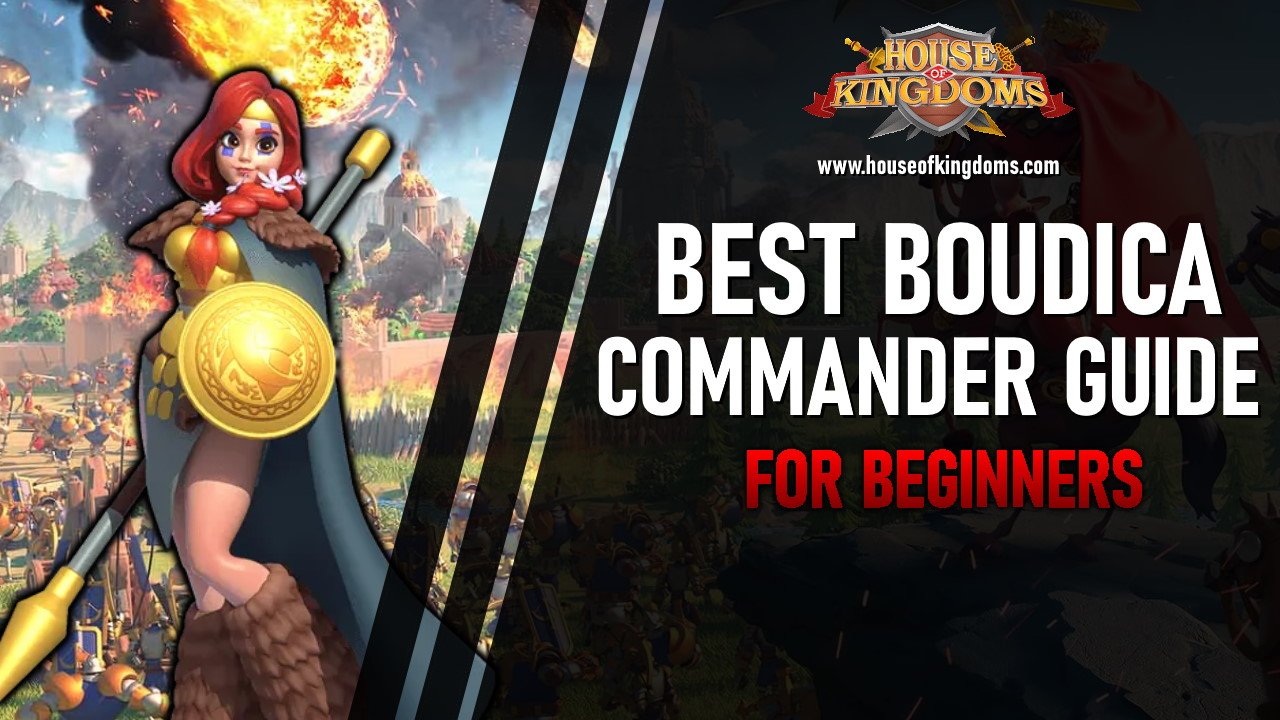 Boudica is an epic commander that released in the original Rise of Kingdoms game. She is a strong peacekeeping commander that excels at doing massive damage towards neutral units such as barbarians and keeps. In addition to that, she is the master of all armies and delivers powerful active skills that cripples her enemies.

Why Boudica is the Best Commander?

Boudica was a queen of the British Celtic Iceni tribe who led an uprising against the occupying forces of the Roman Empire in AD 60 or 61. However, the Roman governor Gaius Suetonius Paulinus’ eventual victory over Boudica confirmed Roman control of the province.

Boudica then either killed herself to avoid capture or died of illness. Interest in these events revived in the English Renaissance and led to Boudica´s fame in the Victorian era. Boudica has remained an important cultural symbol in the United Kingdom.

The absence of the native British literature during the early part of the first millennium means that knowledge of Boudica´s rebellion comes solely form the writings of the Romans.

Welcome to our in-depth Rise of Kingdoms guide for Commander Boudcia. This informative guide was created to help provide an overview of Boudcia skills, talent tress, gameplay, strategies, and guides in Rise of Kingdoms. The purpose of this overview guide is to help new and experienced players understand how to play Boudcia effectively and maximize your strategic advantages.

Boudcia is the starting epic commander for Britain and is one of the best commander for killing neutral units like barbarians. She comes with a combination of accelerated rage generation skill builders, direct damage, and mitigating enemy’s rage that makes her one of the best pick for both PvP and PvE. Due to her fast rage generation skills, Boudica is able to keep a high uptime on attack reduction and dishing out moderate amount of direct damage factor.

To obtain Boudcia, you need to gather 10 Boudcia sculptures. Once you get 10 Boudcia sculptures, go to the Commander Selection Screen on the lower right corner, scroll and tap on Boudcia to summon her. She comes with Integration, Peacekeeping, and Skill abilities. Stick around with us to learn more about her skills, talent builds, roles, and pairs.

In the next part of our best Boudica commander guide, we will take a look at each skill that comes with her. Boudica is considered to be one of the best commander for neutralizing barbarians early on. Her bonus attack to neutral units gives you one of the early advantage to quick leveling for commanders that pairs with Boudica. Take a look at each skill to learn how to maximize Boudica’s to her true potential power.

I actually like this active skill a lot on Boudica for a number of reasons. First, it deals direct damage factor each time she activates it. Plus, it reduces your target’s rage bar and decreases their attack by 25% for 2 seconds. Lament of the Insurgent is a great active skill that deflects potential nukers.

This passive skill is great for killing barbarians. When it’s max out, Boudica deals 25% more damage to barbarians and on top of that, you get 20% increased commander experience to help out with the leveling phases.

Celtic Blood is an awesome skill that passively restores a small amount of rage. At the same time, a portion of the army under Boudica’s leadership gets healed. This passive skill dynamically increase her active skill usage and maintains high uptime which makes it an attractive skill to invest points into.

In the next part of the best Boudica commander guide, we will talk about talent builds that works out for her. There are three optimal talent builds that you can easily roll with Boudica. However, it depends on your strategy and gameplay, a certain talent build will work out the best for your needs while others will have different preferences.

In Rise of Kingdoms, Boudica is an ideal commander for farming neutral units due to her passive skill that grants bonus damage to barbarians. But, you can definitely play her in PvP battles and out in the field. Without further ado, let’s check out our best talent builds for Boudica!

This is one of the most popular and effective talent build for Boudica if you plan to use her for farming neutral units. The added bonus damage and experience gain that you get with this talent build makes it one of the easiest choice for accelerated leveling.

In addition to that, a small portion of the talent points goes into building rage generation and increasing the damage that she does with her active skill. Ultimately, this talent build focuses on being able to build rage fast enough to maintain high uptime with her active skill while maximizing damage on neutral units.

If you want to be able to excel at field role with Boudica, this talent build is great. It focuses on building rage fast enough while further increasing damage, defense, health and march speed of the troops under Boudica’s leadership.

The flexibility that you get with this talent build means you can pretty much roll any army type. Similar to the PvE talent build, this build also lets you generate rage quickly to maintain high uptime with her active skill. Which makes it absolutely an ideal choice for battling both enemy players and barbarians.

Another best talent build to roll with Boudica is this build. If you want to play Boudica on the offense, go with this talent build route. It focuses on increasing all damage, defense, march speed, and health of each army type. When you play with 3 or more army type, they all get bonus defense and attack value which makes it one of the best pick for combined army.

Unlike the other 2 talent builds, it doesn’t focus on generating rage quickly. Instead, it focuses on further increasing the damage from active skill and providing a steady flow of rage thanks to passive bonus rage generation. Ideally, this talent build is best for those who prefer smooth and slow while making her tanky and heavy striker.

In the next part of our Best Boudica commander guide, I am going to talk about star level & talent point upgrade priority to maximize your commander’s combat potential. Here’s how to prioritize your Boudica effectively:

Gathering commanders like Cleopatra VII by default are very weak and only plays well at gathering resources. In some certain case, defensive role. They will always need a primary commander to pair with them whenever they are harvesting resources and that presents an opportunity for you to pair Boudica with Cleopatra VII.

Boudica’s flexible army type means she can seamless integrate with Cleopatra VII’s skills and provide additional rage generation to downplay the enemy’s forces. If you don’t have Cleopatra VII, you can either go with Sarka or Constance instead.

Boudica and Julius Caesar is another good pair to roll with. When you pair her with him, you get expanded troop capacity and active skill that increases your army’s attack, defense and reducing enemy’s attack and defense. At the same time, Boudica can neutralize the enemy commander’s rage generation.

This pair will easily overwhelm your enemy forces with stabilized high damage and defense output in addition to moderate amount of direct damage output. A perfect pair to play with. You also can switch to Scipio Africanus, which is a starting commander for Rome if you don’t have Julius Caesar yet.

Hermann and Boudica is the ultimate silencer combo. Hermann comes with an active skill that reduces the enemy’s rage. When you max out his skills, he gains an expertise skill that silences enemy from casting any skills for 2 seconds. Thanks to Boudica’s already high uptime for her active skill, this pair will basically keep your enemy silenced for most of the part of battle.

It’s great when you want to cripple main nukers such as Mehmed II and Genghis Khan. So, ideally if you want to become an effective player out in the field and protecting your garrison against potential nukers, roll this commander pair to take your enemies out by surprise.

Boudica and Baibars pairs pretty well due to improved rage generation. This means Baibars will be able to dish out more damage thanks to increased use of active skill. In addition to that, there’s a small chance for the troops to deal 150% increased damage. Which means the cavalry under his leadership will be able to deliver crippling blow to the enemy.

This allows for a simple and easy chain-farming barbarians. But it also works pretty well in PvP battles if you ever find yourself in need of additional push to increased splash damage. In this combo, Baibars is better suited as the primary commander.

Looking for lighting fast rage generation pairing? Then you need to do Boudica + Sun Tzu combo. This is one of the best and most lethal pairing for anyone planning to stick with epic-quality commanders. Both commanders will be able to dish out their active skill in rapid success. Additionally, Sun Tzu increases the overall damage of active skill by 20%.

This allows Sun Tzu + Boudica combo to be viable for PvP battles and PvE battles. If you max Sun Tzu out, he will be able to do additional damage with his active skill and hit upwards to 5 targets at the same time. Absolutely lethal pairing for epic-quality commanders, the best pick for free-to-play players.

In this part of the best Boudica commander guide for beginners, we have included a list of guides and tips for you. These guides basically covers tips on strategies and gameplay with Boudica as your selected commander in Rise of Kingdoms. Be sure to check them out to learn more about this commander: